The City of Lexington, North Carolina was settled in 1775 in what was to become the industrial region of North Carolina known as the "Piedmont Triad". Lexington was incorporated in 1828 by the North Carolina General Assembly and became the county seat of Davidson County in 1847. Centrally located in North Carolina, Lexington's land area is 18 square miles with a population of approximately 19,000.

The City has a Council-Manager form of government and is governed by an eight-member City Council consisting of two members elected at large and six elected by wards. The Council operates under the guidance of a popularly elected Mayor. Council members are elected on a nonpartisan basis for staggered four-year terms; and the Mayor is elected on a nonpartisan basis for a two-year term. The Mayor may vote only in case of a tie among members of the City Council. The City Council is responsible for establishing policy, passing ordinances, adopting the annual budget, appointing committees and legal counsel, as well as hiring the chief administrative officer, the City Manager. The City Manager is responsible for carrying out the policies and ordinances of the City Council, for overseeing the day-to-day operations of the City, and for the appointment of the Department Heads who direct City staff to deliver the services and to meet the Keys to becoming a City of Choice. 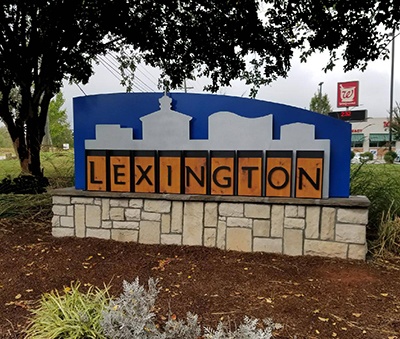 The City is a multi million dollar government operation providing a full range of services including public safety with professional police and fire protection, recycling and waste collection services, the construction and maintenance of streets and infrastructure, parks and recreational activities, cemetery services and cultural events. In addition, the City of Lexington owns and operates four utility services: a water treatment and distribution system, a wastewater treatment and collection system, an electric distribution system and a natural gas distribution system. These utilities also serve customers in areas throughout Davidson County in addition to serving city residents and combine for approximately 76% of the annual budget. The City also owns and operates a 6,116 yard, Par 71 public golf course.