In 1989, the uptown fire station was constructed to allow for expansion of the fire department and city 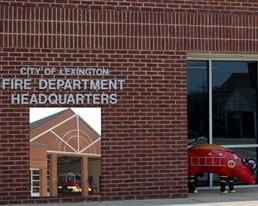 offices. Referred to as Fire Station #1, the station is located near the uptown business district and is home to Engine 1, Ladder 1, Command 6 and the department’s administrative offices. The station also houses Ladder 2, an unmanned reserve truck. The first due response area includes central and most of eastern Lexington including the uptown business district and surrounding neighborhoods.

Constructed in 2011 as an upgraded replacement facility, this station protects the rapidly expanding

southern portions of Lexington. Referred to as Fire Station #2, the Hargrave Road station district covers the southern part of the city limits. Included in the first due territory are a variety of single and multi family occupancies, shopping centers, Lexington Business Center industrial park, Lexington Medical Center hospital, as well as the Davidson County Airport. The Interstate 85 corridor also runs through the district. The station houses Truck 2, Engine 4 and Engine 8.

Lexington’s third fire station was constructed in 1975 to cover the northern portions of the city. Fire

Station #3 serves a territory consisting primarily of small business and residential occupancies including the north side area and the historic Erlanger Mills neighborhood, as well as diverse properties such as Childress Vineyards winery complex and Parkdale Mills, Lexington’s only remaining textile mill. Additionally, US Highway 64 and Business 85 bisect the district and the proposed Interstate 285 (currently US Highway 52) will run through portions of the district. The station houses Engine 3 and Engine 7.